with the Good Heavens team 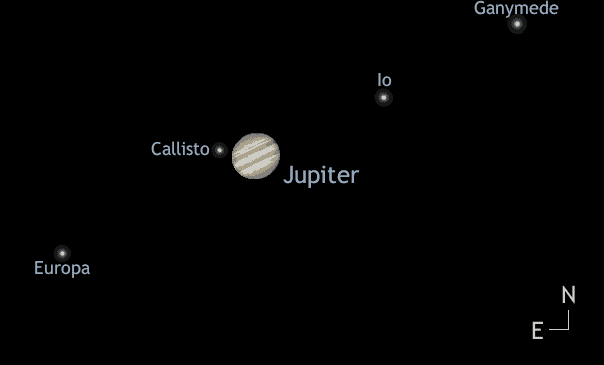 When the Good Heavens team marvel at the super dark Great Barrier Island sky, one of the celestial objects we particularly enjoy is Jupiter. Our solar system contains eight planets that orbit around our Sun. Earth is the third closest planet to our Sun at approximately 150 million kilometers. Jupiter orbits at number five, at an average of just over 750 million kilometers away.

So what do we love about Jupiter?

Jupiter is one of the brightest objects that’s visible in the sky, after our Sun and the moon and at times, Venus. Jupiter is so bright because it is the biggest planet in our solar system. As such, it reflects a lot of the light from our Sun. It is also the closest of the four (bigger and outer) gaseous planets. It appears brighter than any of the stars that are visible behind it, and that are much further away. This is helpful as it makes Jupiter easy to recognise among the stars in the winter evening sky. It’s just the brightest ‘star’ we can see.

Looking at Jupiter through a telescope

During our Dark Sky Experiences, we look at Jupiter and other celestial wonders through an 8” telescope. And Jupiter is fantastic to look at through a telescope. We can just make out the different coloured bands on its surface – the clouds that consist of different gases in Jupiter’s atmosphere. But what is even cooler, is that we can see some of the planet’s moons.

Observing Jupiter’s moons through a telescope

One of the first people to observe and hopefully enjoy Jupiter through a telescope was Galileo Galilei around 1610, in Italy. He would have seen Jupiter similar to what we see doing our experiences, but we have more magnification. In 1610, the telescope had only just been invented in the decade before and this invention had made its way to Italy. Galileo managed to make several improvements to the design of the telescope. As a result he increased the magnification capability to 20X. This enabled him to observe celestial bodies in a lot more detail than ever before. He could thus observe Jupiter and some of the moons that orbit this planet, and that have since become known as the Galilean moons.

At the beginning of 1610, Galileo wrote a letter containing the first mention of Jupiter’s moons. At the time, he saw only three, and he believed they were fixed stars near Jupiter. He continued to observe these orbs between January and March 1610. In that time, he discovered  that there was a fourth body, and that these four orbs were not fixed stars, but that they were orbiting Jupiter.

Galileo’s discovery proved the importance of the telescope as a tool for astronomers. It showed objects in space that could be discovered that until then were unseen by the naked eye. It is a tool we love to use during our stargazing tours. Looking through a telescope can literally be eye-opening. In Galileo’s time, in the early 17th century, the discovery that celestial bodies orbited something other than Earth smashed the then-accepted Ptolemaic world system. This system assumed that Earth was the center of the universe and that all other celestial bodies revolved around it. Because Galileo’s observations disproved this, some people mark Galileo’s observations as the start of modern science.

So when we gaze at Jupiter

It is no longer just a bright ‘star’. It is now a planet we know. The fifth planet in our solar system with two/three or four of its biggest visible moons. We now know that the reason why this number of moons changes is that they sometimes hide in front of, or behind the planet. We also know that more than eighty moons have been discovered around Jupiter. And that the later additions have only become visible in the twentieth and twenty-first century through closer observations with larger telescopes and closer approaches with spacecraft like Juno. We also like to spare a thought for Galileo Galilei, who changed our view of the world and of our solar system.

We are looking forward to enjoying Jupiter in July and for the rest of 2020 as well 😉 as Jupiter will be in the evening sky until December 2020.

Join us on one of our stargazing experiences if you would like marvel at Jupiter and other celestial bodies with us.