Life in a Dark Sky Sanctuary

Looking at the dark silhouettes of the stargazers huddled in their moon chairs around me, I had a little giggle to myself. “These are dark tourists”. It’s a term coined for people that visit places where morbid things have happened. I knew that even though allegedly there has been some awful warfare on our island in the past, it wasn’t why these dark shapes were here. They came to enjoy the beautiful dark sky above – Our magnificent Dark Sky Sanctuary sky. 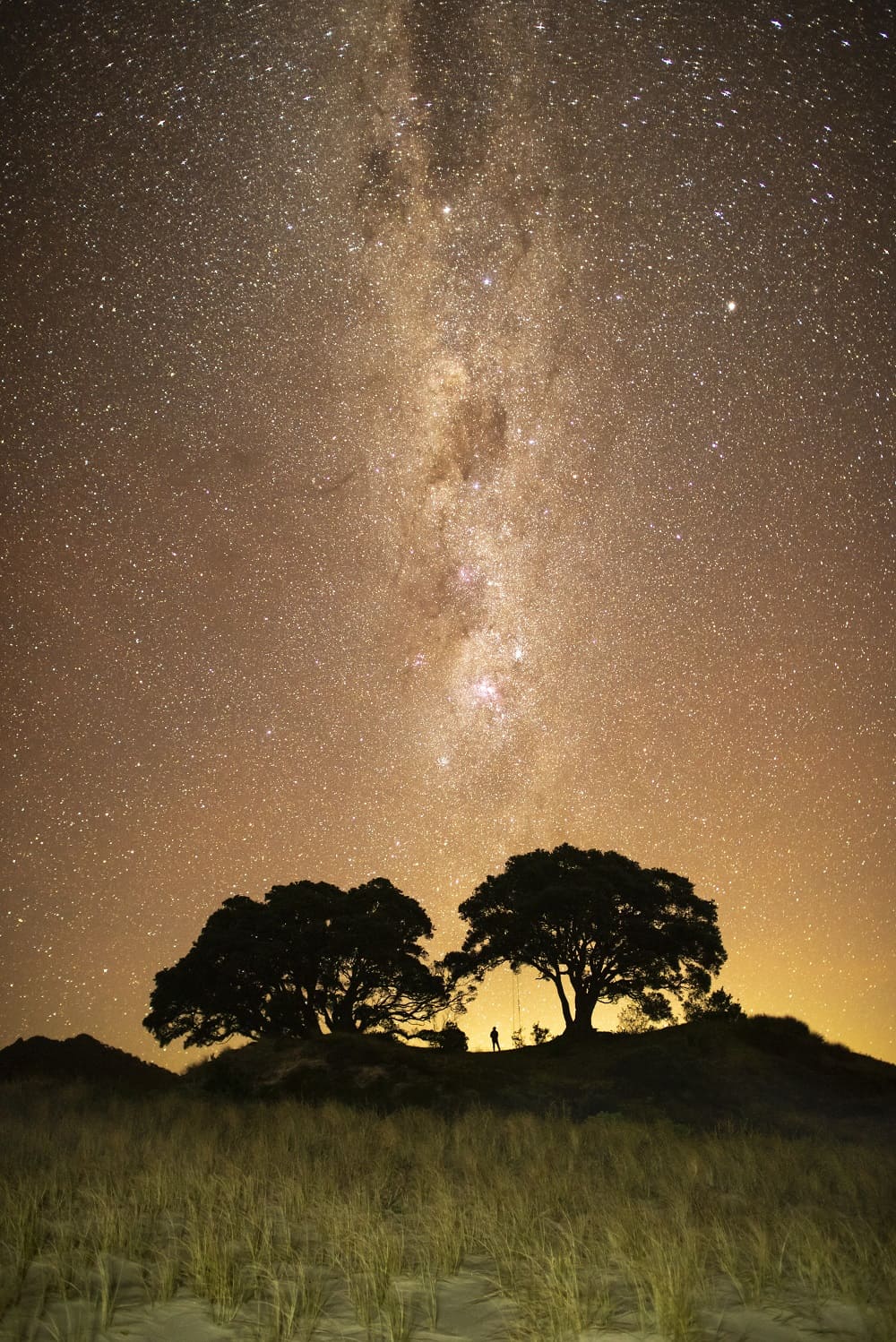 Aotea Great Barrier Island became a Dark Sky Sanctuary in 2017. According to the International Dark Sky Association, a Dark Sky Sanctuary is public or private land that has an exceptional or distinguished quality of starry nights and a nocturnal environment that is protected for its scientific, natural, or educational value, its cultural heritage and/or public enjoyment. Currently, GBI is one of just over a dozen worldwide.

And whereas most sanctuaries are in very out of the way places that are hard to access, Aotea isn’t. It’s just a short flight away from Auckland Airport or a 4.5 hour ferry ride from central Auckland. And if you’re not into camping, there is plenty of comfortable accommodation to choose from here, too.

The park in the dark

When our island became a Dark Sky Sanctuary, some of our locals were worried this would impinge on their lifestyle. What would we have to do, to reach or protect this status of darkness? As it turned out, not a lot. 60% of the island is conservation land. And in that area of the island, apart from a few glow worms, nothing lights up in the park after dark.

The human inhibited parts of the island are off-grid. Every single household produces its own power. This used to be done by diesel generators. But in the last decade or so, the price of solar photo voltaic panels has come down so much that you’d be mad not to use them instead. Fuel-, wind- or hydro- generators as occasionally still used as back-up options.

Most of my island friends find that they get throughout the year on their solar panels pretty well, with a bit of additional assistance from another source – usually a diesel generator and more likely in winter. When it’s been cloudy for a few days or when there is a large power load, often from visiting friends or family, the gene may become a necessity, too.

Because we islanders produce our own power, we tend to live within our power means. We are frugal and often only use low wattage (led) bulbs. Outdoor lights are a rarity and very seldom bright. In 2016 a team measured the darkness of our island night, for our Dark Sky Sanctuary application to the IDA. They went around the island to check darkness, but also any potential light pollution. They only found three spots. One at a sports club, one at the pub and one a masthead of a yacht. The lights at the pub and the club were screened off, and the yacht sailed away.

The population density on Aotea is very low. Tryphena, our largest centre, has perhaps 400 inhabitants. The total island, with a surface of 285 km² just over 1000, around four people per square kilometer. And, because there is no reticulated power, there are no streetlights and no billboards. I feel that most people go to bed early here, too. Perhaps it’s because their melatonin is not disturbed by bright city lights? Either way, the island is blanketed in long dark nights, especially in winter.

All of the above ensures that for stargazers, Aotea is bliss. As soon as it gets dark enough to see the stars, it’s dark enough to see thousands of stars wherever you are on the island. It’s dark enough to get your binoculars or telescope out, or just to lean back and look up at the starry spectacle above. A Christchurch astronomer I spoke to at a conference was quite baffled by this. In his urban experience, finding a dark site was a needle-in-a-haystack-mission. Not so on Aotea.

Clear view of the sky

No doubt about it, we did have an issue finding good locations when we started our stargazing tours though. We needed to find places with a clear view of the sky. In Aotea’s naturally pristine environment, there are trees everywhere. And many hills to block out the bottom of the sky. Eventually, we found a great spot on top of the sand dunes, where our view towards the sea is completely unobstructed. In this spot, we use the silhouettes of two large Norfolk pines as landmarks, so that stargazers can easily find us, even in the dark.

In a sky that is ten times as dark as an inner-city sky, we can see ten times as many stars. And that’s a lot. Looking up in a Dark Sky Sanctuary can be a dizzying experience, and it may even take your breath away. If you are willing to jump into the dark with us, come when the moon is not too large in the evening sky. We find that the week before the full moon and two days after, the moon causes the natural light pollution that makes the fainter objects, such as the Milky Way and the Magellanic Clouds less visible to the naked eye.

In fact, when the moon is bright, our night sky is similar to a city sky. In a light polluted sky, you will still be able to see the brightest things, but there is a lot of detail lacking. The lustre has gone. If you are keen to preserve or restore the sky in your place of residence, this is what you can do. And, when you come to GBI to leap into the dark, to enjoy our very starry sky with us or by yourself, don’t forget to bring a torch, as once it gets dark, it really does get dark.

Leap into the dark with us!